One of the first things that I learned about the French in the south is that eating out is more of the exception, than the rule.  Although there are many restaurants in Montpellier, most people would rather cook and eat at home rather than spend money going out to eat.  Coming from a restaurant-filled city like San Francisco, the concept of eating in instead of eating out with friends was something to get used to.  In fact, I’m still trying to get used to it.  However, since the French here eat in a lot, it means that most people here are excellent cooks and excellent bakers.  Some of the wonderful meals I’ve had at friends’ homes are so much better than I could get in any restaurant.

So I thought that since I have some time on my hands here in the south of France, I would learn to join the French in their art of cooking and baking.  As I’ve baked before in San Francisco, I thought that would be a great place to start.  The first thing I tried to make?  The macaron.  Go big or go home, right?

I’ve heard many horror stories about macaron making.  How it takes months to master, how it turns bakers’ hair white with frustration, and even how many start to call them “craperons” after many failed batches.  But I decided not to let that deter me.  At our local supermarket, they even had a box of pre-made macaron mix.  I thought that this would be a great introduction into macaron making… 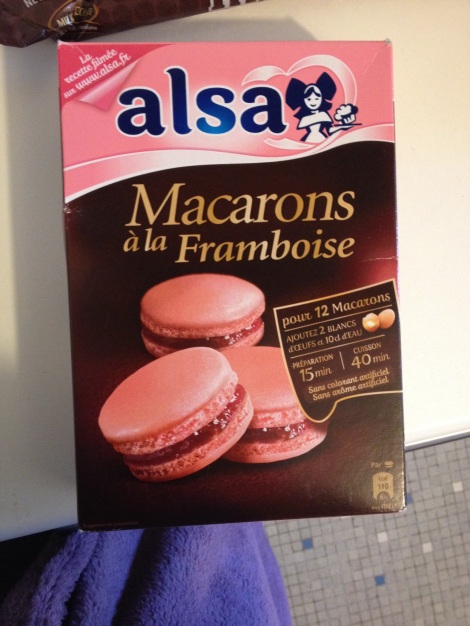 As it says, add 2 egg whites and a little water.  Easy peasy, right?  WRONG.  The difficulty with macaron-making is not in the ingredients, it’s all in the technique.  Even with pre-bought macaron mix.  I did not beat my egg whites stiff enough, therefore the batter was too liquid, making all the macaron batter run into one major pink blob on the baking sheet.  On top of that, our funky oven (not a real oven, more like a really big toaster oven), burned the tops of the macarons.  Disaster.

Sadly enough, these were the only good ones of the whole batch. The 3 in the back are not chocolate, they’re burnt. 😦

Somehow, I didn’t allow that to deter me.  I decided to read lots and lots of macaron blogs (it’s amazing how many are out there).  Reading these blogs, I realized that the basic ingredients to the macaron were:  Almond flour (amandes en poudre), powdered sugar (sucre glacé), sugar (sucre en poudre), and egg whites.  As these ingredients are easily found at any French supermarket, I decided to forgo the box and try making macarons from scratch.  There was only one problem – the ingredients for the recipes were all measured in grams.  I did not have a kitchen scale.  All I had were measuring cups from IKEA in ml, similar to what we’re used to using in the States.  So how would I convert the grams into millilitres so that I could use my measuring cups?  Well, I looked online, and it stated that 1 gram = ml for water.  Yes, being a science major, I knew that water does not have the same density as flour or sugar, but I decided to try the 1:1 conversion and pray that it worked out.  As you can imagine, it didn’t.

Take #2. They were actually very yummy almond cookies with chestnut filling, but they didn’t look anything like macarons. I was so disgusted at Take #3 that I didn’t take a photo, but it pretty much looked the same as this…

So it was back to the drawing board.  I read more blogs to troubleshoot and they all said the same thing – I needed a scale for precise measurements.  I ordered a kitchen scale online from Amazon.fr and one week later a scale arrived.  I also bought a cheap pastry bag set from the supermarket, better for making perfect circles.  I decided that this time was going to be it…

Nope.  It didn’t happen.  They turned out to look more like meringue cookies.  Or meringue Hershey kisses.  But at least they were starting to look a little more like macarons.  I knew I was getting closer.  It was back to the macaron-making blogs for me, and I decided that I likely had undermixed the batter.  So I decided to give it one more shot…

This time I did everything to the letter.  I didn’t overbeat my egg whites and I made sure that macaron batter was perfectly mixed.  I stuck them in the oven.  The earlier batches had problems with browning tops and undercooked bottoms due to the funky oven, so I lowered the temperature, stuck a wooden spoon to keep the oven door open a few cm, and baked the macarons for over double the recommended baking time (25 minutes).  As a result, the bottoms were able to cook through without burning the tops.  I looked in the oven, and after 10 minutes, feet were starting to form!!!!  I couldn’t help doing a little happy dance in the kitchen.  (“Feet” are the little trademark indentations that form along the base of each macaron.)  As it looked that this batch may turn out well, I decided to make a nicer filling.  I mixed some chestnut spread and butter to form a chestnut cream.  After the macarons cooled, I filled them with the chestnut cream and stuck them in the refrigerator for 24 hours (recommended for better texture and flavor).  24 hours later and I finally had it, my first macaron success!!!!

Now that I had conquered the basic macaron recipe, the sky was the limit to the macarons that I could create.  I found some frozen raspberries at the supermarket and took these, cooked them down, added gelatin and sugar, and I had a raspberry macaron filling…

I was feeling even more inspired last night so I decided to be adventurous and make 2 batches of macarons.  Unfortunately, I only have brown and pink powdered coloring now, so my options are limited.  I decided to make a homemade salted caramel sauce, or caramel au beurre salé as the say in French.  The first attempt was disaster (note: sugar burns REALLY fast on the stove), but I got it better on the 2nd try.  The only problem was that the caramel was too warm and liquid when placing it on the macarons, causing a bit of messiness, but I think it’ll improve next time when I try with colder caramel.  My second batch was done with raspberry, but I mixed my stewed raspberries with mascarpone cheese for a more creamy filling… 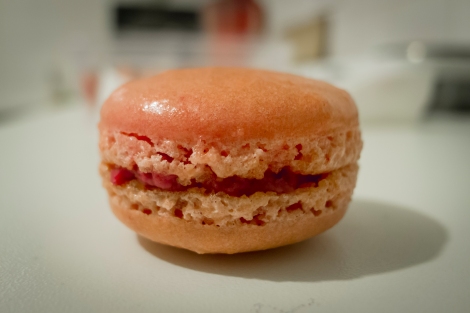 I promise you, there will be more variations of macarons to come.  Let the Macaron Madness continue!!!  Bon Appetit!!!

When it comes to French royalty, the blingier the better, even if it’s just for a hallway in a building that stored the King’s furniture. Find out more about this new museum that just reopened to the public after 200 years (!!!) in my latest blog post (link in bio)
French stairways never get old… 😍
Although this looks like just another French château, this beautiful building and garden houses a famous French artist’s works. Find out whose on my latest blog post (link in bio)…
Holding onto the last days of summer while I can…
Sunset falls on Île de Ré…
Summer days always call for a refreshing pick-me-up… 🍦
Île de Ré is known for its sunny beaches, fresh seafood, beautiful villages and … salt. Find out more about how sauniers (or salt cultivators) produce salt out of these marshes in my latest blog post (link in bio)
In love with these arcaded passageways of La Rochelle. They were originally built to let merchants sell their goods in a protected space out of the rain. ☔️
Another beautiful summer in France, just this time all masked up. 😷Find out about the popular summer destination of La Rochelle, also known as one of the French gateways to the Atlantic, on my latest blog post. Link in bio…