Mont Saint Michel is situated off the coast of Normandy.  It is a tidal island, which means that it’s only an island at high tides. At low tides, you could technically walk to Mont Saint Michel, but it’s highly inadvisable without a professional guide due to quick sand in the area and the speed of the incoming tides.  Thankfully, there’s now a well-maintained causeway that takes visitors from the mainland to the island.

Visitors are actually not allowed to drive to the island.  There is a large well-marked parking lot, which costs €11.70 for 24 hours.  From the parking lot, you can either walk 30 minutes across the causeway or take the free shuttle bus.  We arrived relatively early in the day, around 9:30am, and thankfully it was still quiet at this time.  We thought we’d take advantage of the peaceful surroundings and walk from the parking lot to Mont Saint Michel.  We’re grateful we did because we got some stunning views along the way…

As we got closer and closer to the island itself, we could more and more tourists coming by shuttle bus.  Although it was off-season, it was quickly apparent that Mont Saint Michel is crowded with tourists all year round.

Not pictured: Hundreds of tourists taking selfies behind me

A boat grounded at low tide 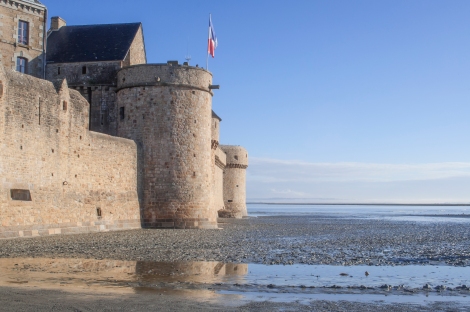 A closer look at the town walls

Once we entered the town itself, I felt like I had walked into Disneyland.  Probably it was due to the crowds of tourists and the commercialism all around.  Just as you have Mickey Mouse everywhere in Disneyland, here you have La Mère Poulard, a corporation which seems to own most of the restaurants and shops on the island.

Drawbridge leading into the town of Mont Saint Michel

Looking up towards Mont Saint Michel’s picturesque abbey, which walking the town walls 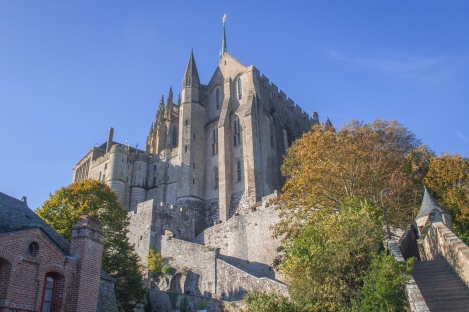 Though before it was a corporation, la Mère Poulard was a woman who made specialty omelettes for restaurant guests.  You can actually eat at that same restaurant today, though that specialty omelette will now set you back €30.  Paying €30 for eggs seemed a little much for me, but I settled for a cheaper one at their cheaper (but still not cheap) restaurant, Terrasses Poulard.  As omelettes go, it was different – much fluffier – and quite delicious, but I still couldn’t see paying €30 for it.

So all in all, I was happy to have seen the stunningly beautiful Mont Saint Michel, though the cramped interior was disappointing compared with its dramatic exterior.  We walked away from this tidal island, understanding why Mont Saint Michel is one of the most visited sites in France.