As much as it was nice to live in the sunny south of France, one of the really nice things about living near Paris is its proximity to 3 major airports (Charles de Gaulle, Orly and Beauvais), which means it’s easy to jet set all over Europe for relative peanuts.

So when I heard that there was a country music festival in Dublin (yes, I – a San Francisco girl – actually like country music), I jumped at the opportunity to fly over there to check it out – an easy decision considering the round trip cost €78 on Aer Lingus. I’d been to Dublin before, so I thought that I’d like to see something different.  I was debating between 2 beautiful parts of Ireland – either the beautiful West coast and the Cliffs of Moher OR Northern Ireland and the fascinating Giants Causeway.  Unfortunately, due to limited time, we couldn’t do both, and the uniqueness of the Giants Causeway won out, causing us to choose Northern Ireland.

So after we touched down in Dublin, we headed straight to the rental car agency.  Just a brief note: credit card companies will cover collision rental car insurance all over the world EXCEPT for Ireland and Northern Ireland (I’m still not sure why).  So to avoid the rental agency’s high insurance fees, we went with Worldwide Insure (a British company) and for £7.95, we had full coverage for 3 days.  Thankfully, we didn’t need to draw on this, though.

Back to the car.  I had had a little experience driving on the “wrong” side of the road before in New Zealand, but it still wasn’t the most comfortable experience ever.  The hardest part was knowing how to signal when entering a roundabout.  Thankfully, though, the motorways in Ireland and Northern Ireland were relatively uncomplicated, and we made the 1.5 hour trip to Belfast in one piece.

Another note: Ireland and Northern Ireland, despite both having “Ireland” in its name, are not the same country.  Northern Ireland is actually part of the United Kingdom and, as a result, once you pass the border, the speed limits are in miles per hour (instead of kilometers per hour) and the monetary unit is the pound (instead of the euro).  Belfast, the capital of Northern Ireland, is a very interesting city.  Sadly, it has a bloody recent history, with a 30-year conflict (1968-1998) known as The Troubles between nationalists (mainly self-identified as Roman Catholic) and unionists (mainly self-identified as British or Protestant).  Although most of the violent conflict is over, remnants of the conflict remain, such as in the various murals that are in the city.

We started our trip off right – at the Crown Liquor Saloon, an old Victorian saloon first refurbished in 1885.  It was easily the most beautiful pub I’ve ever visited – with intricate mosaic flooring and stained glass details.  Although not technically in “Ireland”, I still had a start this trip off with a pint of Guinness and fish n’ chips.  And of course, it was incredibly good.

After we took a mini-walk through the town center of Belfast, where we saw its beautiful City Hall lit up at night.

The next day we explored the Titanic Belfast Museum.  I’ve always been fascinated the tragedy of the Titanic (pre-that sappy James Cameron movie, I’ll have you know), so it was interesting to visit the museum.  The museum, which is housed in a building that is similar in height to the actual Titanic itself, sits close to the site where the infamous ship was built.  The admission to get in is not cheap (at £18), but the interactive experience is pretty captivating and amazingly high-tech (there’s even a ride!), and you can easily spend half a day here, maybe even more if you read through all of the displays.

The Titanic Museum, very similar in height to the actual Titanic itself 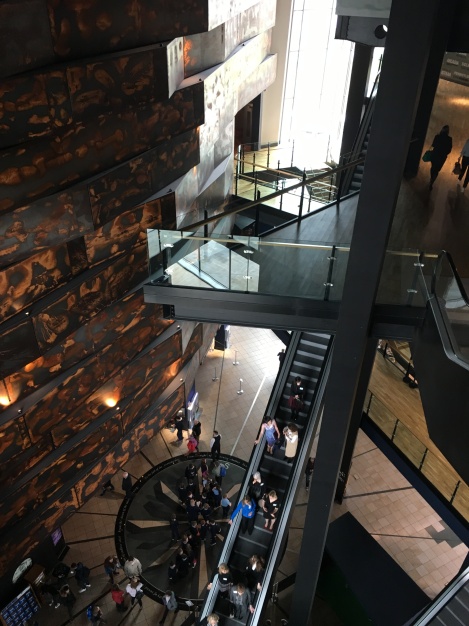 We followed a one-way path through the museum, starting with the environment of Belfast around the time of the construction of the Titanic, leading to its inaugural launch from the dry-dock into the waters, and finally to its fateful night at sea.  There are no actual artifacts from the wreckage itself due to ethical reasons, what there are plenty of factual accounts and related items that make you feel as if you were there on the ship yourself.

Looking down towards where the Titanic first entered the waters 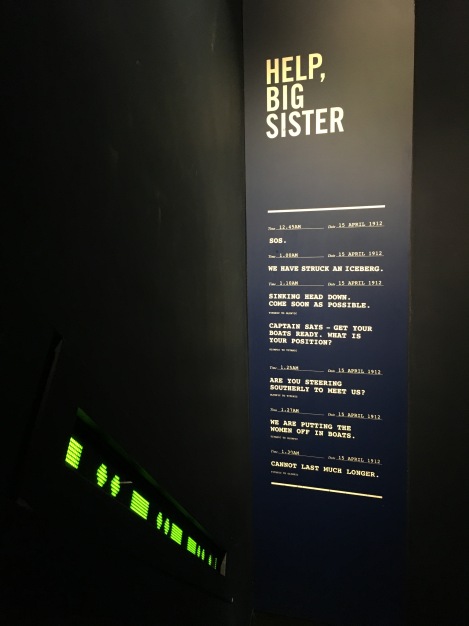 Some of the last distress calls from the Titanic

Included in the ticket to the Titanic Museum is a ticket to visit the SS Nomadic, the last surviving ship of the White Star Line.  This tiny ship in comparison to the Titanic, was a small tender that was used to transfer passengers from land to the bigger ships, such as the Titanic.  Now restored to its former glory, it gave another perspective into the opulence of the ships of the time. 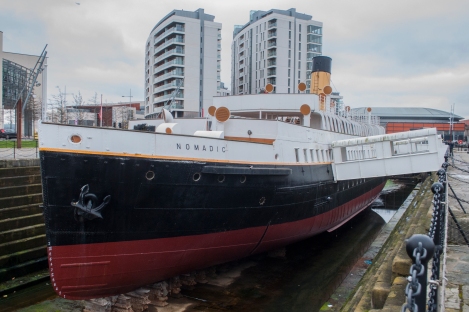 Spooky or high tech?  A recreation of the SS Nomadic’s bar along with a video of a bartender sans legs

Sadly, this was the extent of our visit to Belfast, as our visit to the Titanic Museum and the SS Nomadic took up most of our day.  There’s so much more to the city that I would have liked to explore, but it will just have to be saved for another time.  However, the main reason we were in Northern Ireland was to explore the Antrim Coast, and those photos are coming up next!

4 responses to “A European Detour to … Belfast”

When it comes to French royalty, the blingier the better, even if it’s just for a hallway in a building that stored the King’s furniture. Find out more about this new museum that just reopened to the public after 200 years (!!!) in my latest blog post (link in bio)
French stairways never get old… 😍
Although this looks like just another French château, this beautiful building and garden houses a famous French artist’s works. Find out whose on my latest blog post (link in bio)…
Holding onto the last days of summer while I can…
Sunset falls on Île de Ré…
Summer days always call for a refreshing pick-me-up… 🍦
Île de Ré is known for its sunny beaches, fresh seafood, beautiful villages and … salt. Find out more about how sauniers (or salt cultivators) produce salt out of these marshes in my latest blog post (link in bio)
In love with these arcaded passageways of La Rochelle. They were originally built to let merchants sell their goods in a protected space out of the rain. ☔️
Another beautiful summer in France, just this time all masked up. 😷Find out about the popular summer destination of La Rochelle, also known as one of the French gateways to the Atlantic, on my latest blog post. Link in bio…