After a couple of days in Northern Ireland, it was time to return to Dublin, where we started our trip.  I’d been to Dublin once before in a whirlwind trip that lasted a whole day and a half.  Now, we had another day and a half to try to catch things I hadn’t seen previously as well as to explore something new.

When you have limited time to see a city, and want to get a nice overview, I recommend using the Hop On/Hop Off Bus.  Especially if you can get a nice deal through Groupon (which our friends snagged for us).  Here were a few stops we made using the bus:

Trinity College is Ireland’s oldest college, founded in 1592.  (Just for reference, this was 15 years before the British first settled in the US.)  Walking around, seeing the old buildings brought a sense of history that is unlike anything that I’ve experienced in the US (a common phenomenon for me in Europe).  That is, until I heard the sound of loud music and partying students…

Trinity College is still, after all, a college.

However, what Trinity College does have, which most colleges don’t, is an amazing library which permanently houses the Book of Kells.  The Book of Kells is a beautifully illustrated book containing the Gospels in Latin as well as some other extra-Biblical texts.   It is believed to have been produced in 800 C.E. in Ireland.  To preserve the physical integrity of this old book, no photos are allowed in the dark room with the Book of Kells itself, but it was interesting to see the detail contained within.

But honestly, the main reason I wanted to see the Trinity Library was to see the Long Room.  This stunning room houses 200,000 of the Library’s oldest books.  It reminded my of the Bible verse which says, “To the making of many books there is no end.”  (Ecclesiastes 12:12)  Seeing this room was worth the price of admission alone. 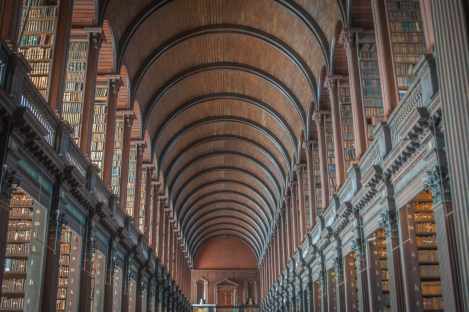 The Long Room at Trinity Library 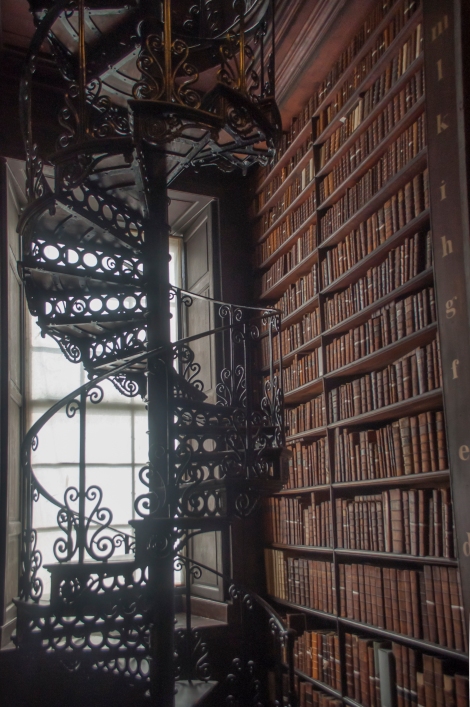 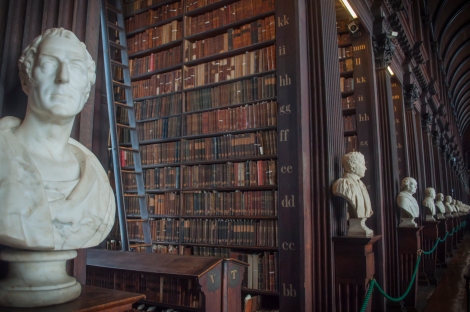 Our next stop was Dublin Castle.  I think I had gotten too used to the castles of France, because this set of buildings didn’t seem too much like a castle to me.  Dublin Castle, built in 1230, was once the seat of the UK government’s administration in Ireland,  but when Ireland gained their independence, it no longer functioned as the administrative seat of government.  It now houses several governmental office and hosts state functions. 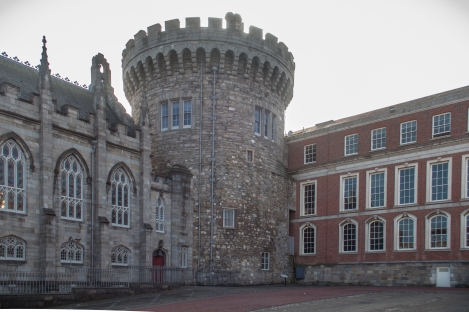 The Record Tower, which is the only surviving original structure from 1228

The Chester Beatty Library is a fascinating museum, especially to those interested in ancient Biblical manuscripts, also known as the Chester Beatty papyri.  These papyri contain portions of the Hebrew and Christian Greek scriptures dating back from the 2nd to 3rd centuries of our common era.  Now that’s old! 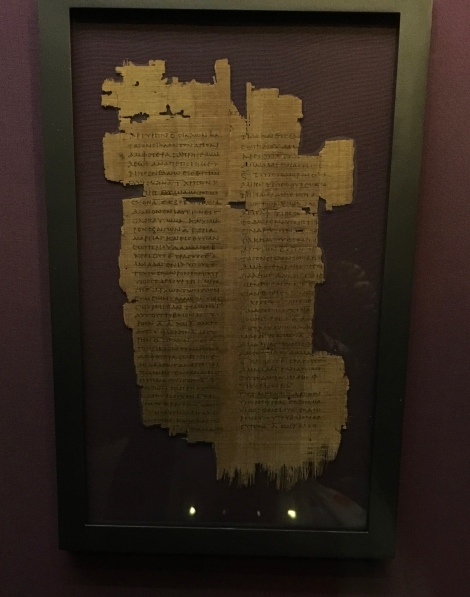 A portion of Numbers Chapter 7, written in Greek and dating from approximately 150 C.E.

I had done this tour on my first trip to Dublin, and at €25 (!!!) admission, maybe it wasn’t something that I should do again…But I honestly love Guinness too much to pass it up. And my dad hadn’t been before, so that made a nice excuse to go, right?  The only problem (and the only negative to the Hop On/Hop Off bus), was that we had less than 2 hours to do the tour and make it back in time for the last bus.  We were up to the challenge! 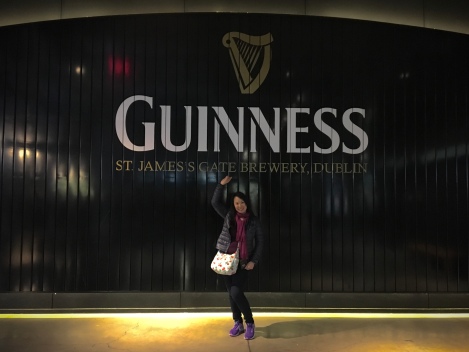 At my happy place

The self-guided tour starts at the bottom floor and works its way 7 floors up to the top.  This waterfall can be found at the beginning of the tour, explaining the 4 main ingredients of Guinness:  water, barley, hops and yeast.  This water is locally sourced from the Wicklow Mountains.  I guess there is something to the water after all.

Looking across to where this black goodness is produced 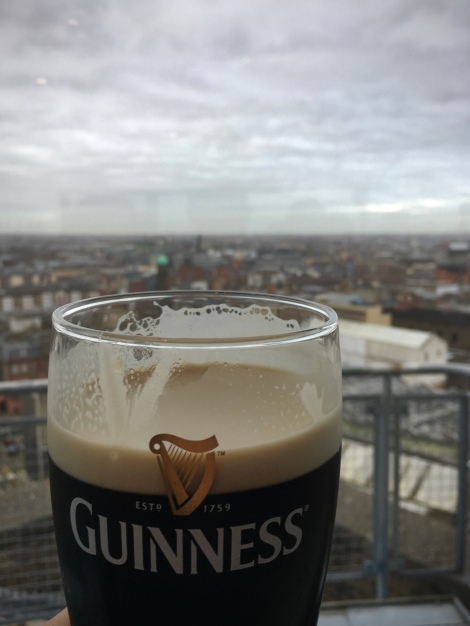 Enjoying this pint at the Gravity Bar, with its 7-story, 360-degree view over the city of Dublin

The sad part?  By the time we made our way up 7 floors to finally enjoy our Guinness, we had only 10 minutes before we had to make our way down to catch our bus.  And, being Asian, drinking a pint of Guinness in 10 minutes is virtually impossible.  We tried to do the best we could, but after 8 minutes (yes, I counted down to the minute) I had to sadly give my half-full glass back to the bartender.  But then, she gave us the happy news – we could take our pint back down to the first floor with us.  So with the extra two minutes waiting and taking to elevator back down to the first floor, I had the opportunity to make a little more headway with this black yumminess.  And, there was actually no one at the door when we left, so we could have even taken this Guinness to go!  But I had to jump on the bus with some measure of dignity, so I refrained.

Now I knew that we couldn’t leave Dublin without experiencing some pub life, and I needed something to soak up that Guinness, so we ventured into the Temple Bar area of Dublin.  Multiple friends had recommended Oliver St. John Gogarty’s (often known simply as “Gogarty’s”) for its live music, we thought we’d head over there.  With its delicious food and entertaining music performed by 2 hilarious older Irish gentlemen, Gogarty’s provided a fun evening indeed. 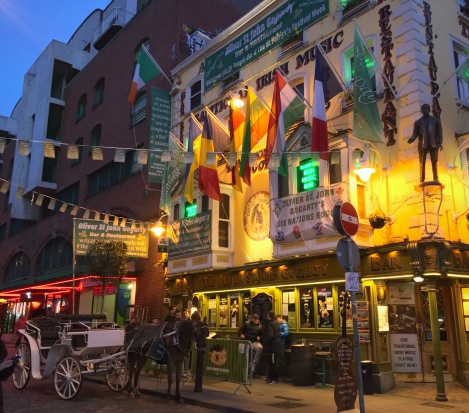 The loud exterior of Gogarty’s (inside, it’s even louder!)

We definitely had a full, varied day in Dublin and it was a blast, from beginning to end!