And it’s not just me saying that.  Gerberoy is literally classified as one of The Most Beautiful Villages of France (or Les Plus Beaux Villages de France) by an independent French association with very strict criteria.  In order to even be considered, each village must meet 3 criteria:

And that’s just the first step!  From that point forward, there are on site evaluations, meetings, and committees to see if this village qualifies to be one of the most beautiful.  Villages can also lose their status if they fail to meet certain criteria.  At this time, there are 157 villages with this special designation.

We had already visited one of these villages while living in the south of France, and it really was beautiful.  So when I found out there was another one, Gerberoy, located just under an hour from my house, I decided to check it out.

Gerberoy is located in the countryside, about an hour and 45 minute drive from Paris and 30 minutes from Beauvais.  It feels like it literally is in the middle of nowhere, but the surrounding area is absolutely beautiful. 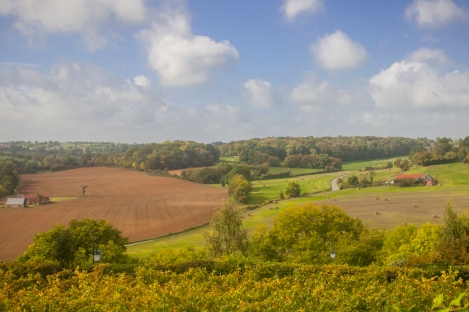 A view of the surrounding countryside from Gerberoy’s parking lot

We actually visited Gerberoy twice this year – the first time in Spring and the second time just a couple of weeks ago in early October.  Coincidentally, both times, we arrived at this small village at noon.  Now if you know anything about French culture, you know that French people take their lunch very seriously.  Which means that, at noon, everything shuts down and everyone goes home to eat (with the exception of big cities like Paris).  So, arriving at noon, we found ourselves in what appeared to be a ghost town.  In fact, when we visited mid-week earlier this month, we didn’t see one single person in the street during our whole visit! However, the open shutters and well-maintained homes tell us that someone must be living there.

No signs of life on the streets of Gerberoy, just beautifully maintained front gardens 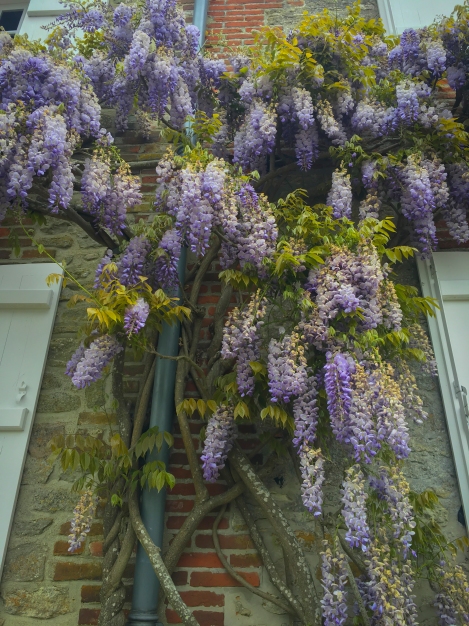 Gorgeous wisteria on our springtime visit 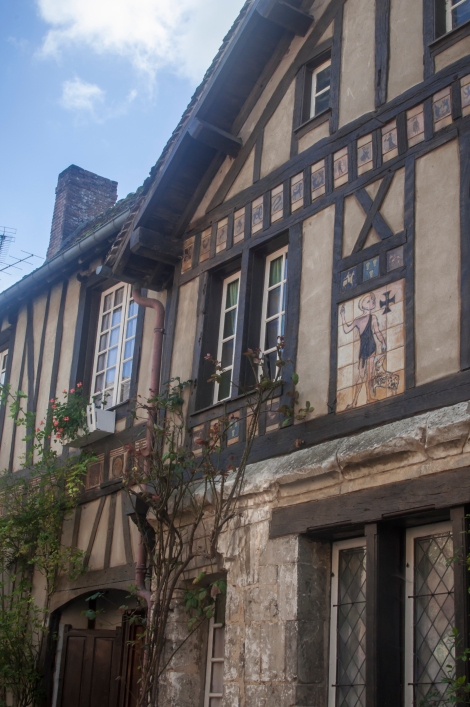 Unusual tile work on this home 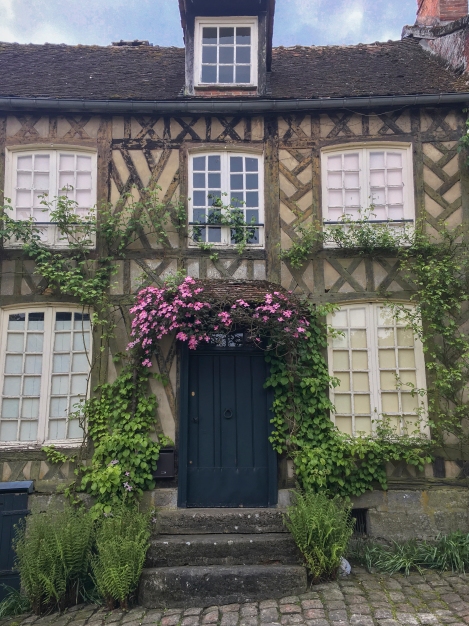 Gerberoy is also well-known for its beautiful roses that grow in front of these picturesque homes.  Unfortunately, when we came in May, we were a bit too early for the roses, and when we returned in early October, we were then too late.  However, I was able to take some photos of the few flowers still holding on despite the cold weather.

In May, these futuristic-looking flowers were just starting to bloom 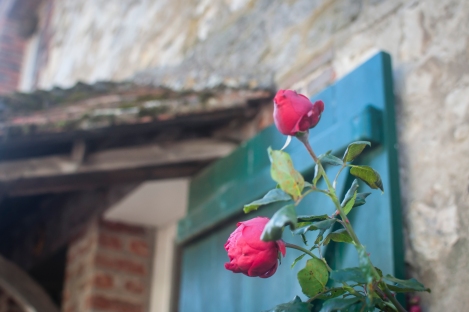 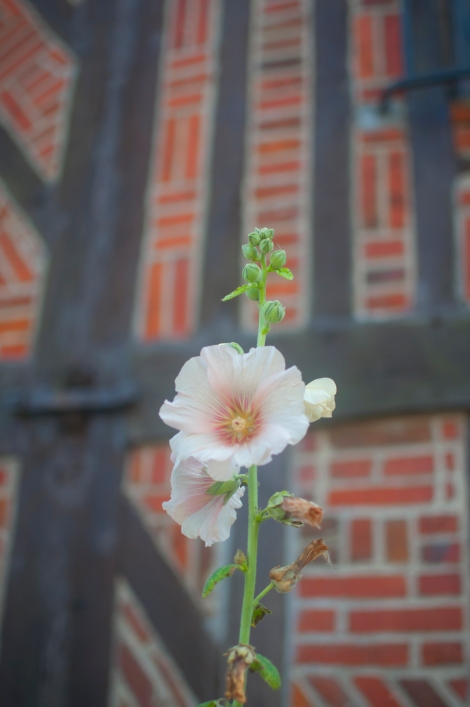 Since it was lunchtime, after a bit of exploring, we were starting to get hungry.  Thanks to TripAdvisor, we found a cute little tea shop called L’atelier gourmand de Sarah.   Their menu is a little basic, with lunch tarts and dessert tarts, but everything there is homemade and delicious.  Just a note – they are cash-only and the nearest bank is 2km away, so make sure you bring cash before you enter this town.  We found this out the hard way, and literally emptied all of our wallets to give them every last cent that we had.  It was worth it though!

The inviting host of this little tea shop

Adorable outdoor seating for this tea shop.  If only the weather was better… (le sigh) 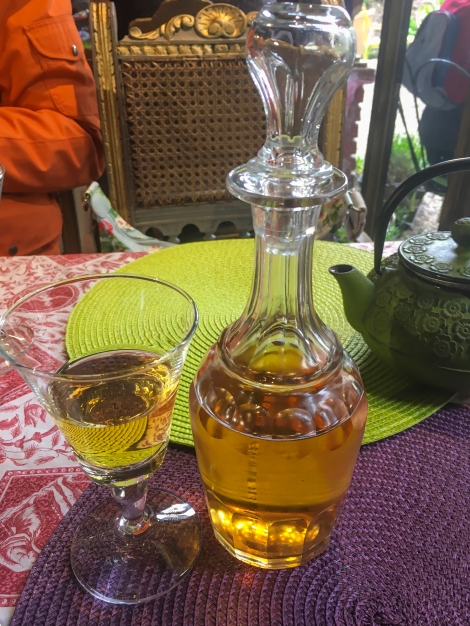 Antique, fancy presentation for a glass of hard cider 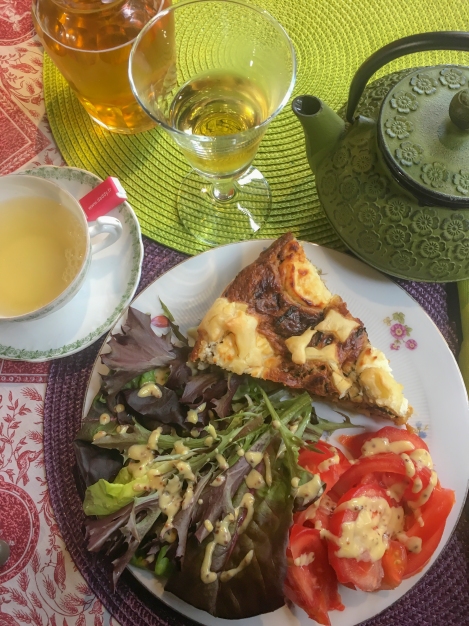 Lunch with a pot of tea to warm up

After warming up a bit, we decided to check out Les Jardins Henri Le Sidaner (The Gardens of Henri Le Sidaner).  Henri Le Sidaner was an early 20th century impressionist painter who fell in love with Gerberoy at first sight and moved there.  He built 3 gardens on the site of old castle ruins.  Unfortunately, we didn’t have an opportunity to visit the gardens themselves, but we were able to get a nice view from a hill opposite the terraced gardens.

We had an additional interesting experience during our May visit to Gerberoy.  As mentioned previously, we arrived at noon to what appeared to be a ghost town.  However, when got to the center of this village, we saw a market with old-school scales, wheelbarrows, and produce.  The crazy thing is that it looked super old, like a scene from the late 19th century, yet everything was clean and pristine.  And it was abandoned.  Weird. 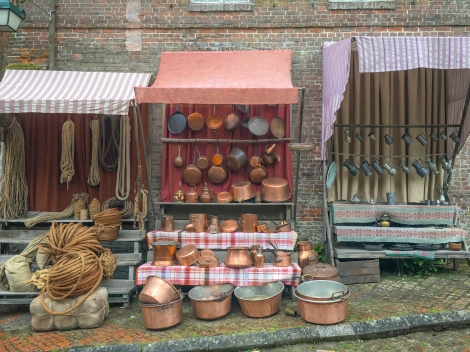 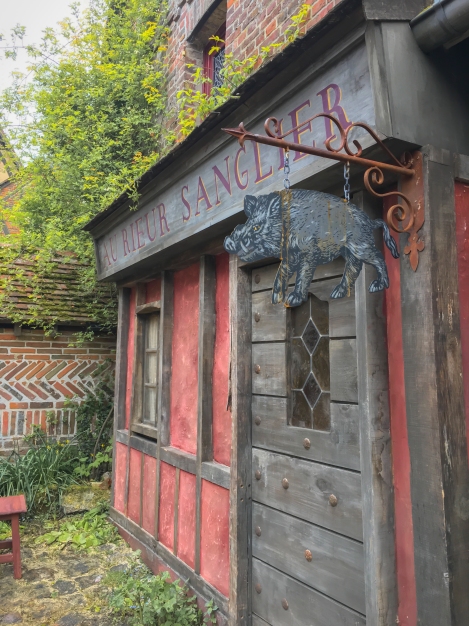 All of our questions were answered when we returned back to the same area after lunchtime.  The village center actually was being transformed into a set for a movie that was filming later that afternoon.  So the village was extra Disney-esque that day.  When we returned in October, it was returned to its still-pretty, yet normal state. 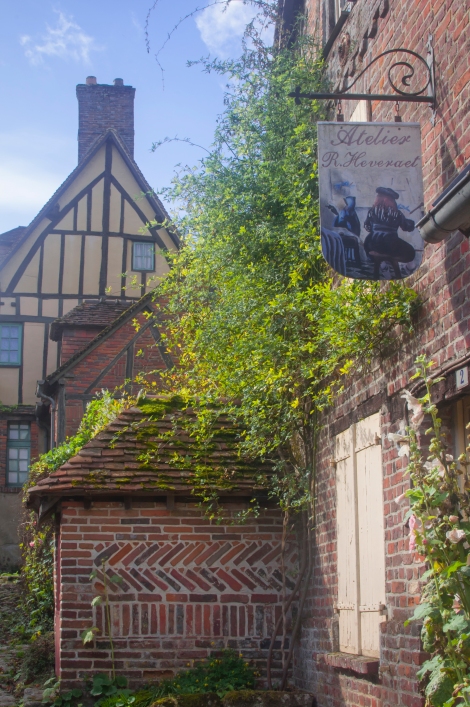 The same “pub” seen in the photos above, Au Rieur Sanglier, is actually an atelier

After 2 visits to the little village of Gerberoy, we could see why it’s called one of the most beautiful villages of France, no matter what season you visit.  There’s a reason they film movies here – it’s easy to imagine oneself in a different century while walking through the village streets.  Excuse me now while I start belting out a few notes from Beauty and the Beast: