Soooooooo tired…. I am so tired. But I will make the attempt to sleep-blog, as it were…

Our day started out really well, with 2 tours of the British Museum. The first tour showed us artifacts from Ur in Ancient Mesopotamia, interweaving it with the Bible account of Abraham and Sarah. The second tour showed us various Egyptian artifacts from the time of Joseph and the Israelites in Egypt. Both were incredibly fascinating, bringing Bible accounts to life. 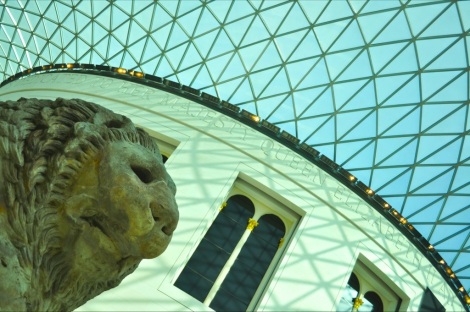 The Great Court in the British Museum, with its impressive glass ceiling 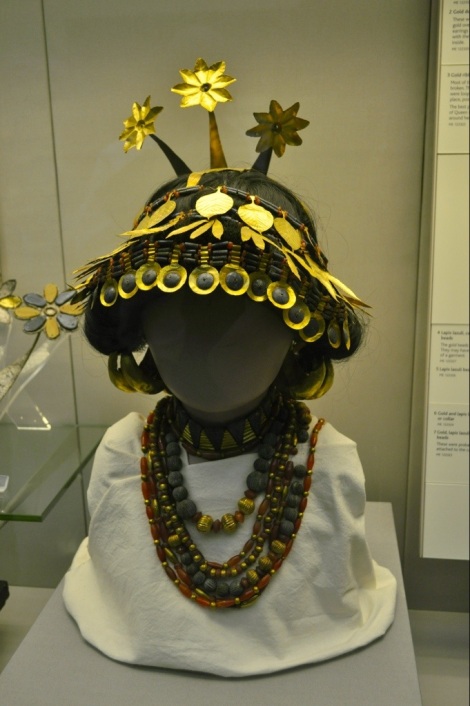 Woman’s Headdress from Ur

Rameses II of Egypt – we learned that this Pharoah was quite full of himself!

Also viewed – some graphic Assyrian reliefs depicting conquer of other nations. These winged creatures used to stand guard at the Assyrian palace

In between tours, we were able to indulge in some Fish n Chips, as well as make a couple of Starbucks runs to escape the heat. London is experiencing a bit of a heat wave right now, with temps in the high 70’s today. It looks like we’ll never be able to escape the heat, from Brazil to NYC and now here. I think we’re bringing it with us. The problem with London and heat is the same problem we have in San Francisco – it almost never gets hot so those few days that it is, air-conditioning-less buildings can make life miserable.

After our long day of walking around the British Museum, we met up with our friend Martial. We did a bit of shopping and I found myself powerless to resist buying just one more item at Uniqlo on Oxford Street, although the Uniqlo prices are significantly higher. (In my defense, it was a pair of comfy pants that I wasn’t able to find at the Uniqlo in NYC.) After that, we decided to karaoke a bit in the basement of a Korean restaurant, singing songs as varied as Van Halen, the Righteous Brothers, Journey (of course!), Lady Gaga, and Adele. (No photos here – what happens in a London underground karaoke room stays in a London underground karaoke room…)

Emerging from the karaoke room, we were hungry for dinner. Martial gave us a few recommendations. The one that sounded the most appealing to us was a pub near the Thames River. Given the warm weather, this sounded like a great idea. Martial said to follow him as we were to walk there. A little voice inside my head thought, “We’re nowhere near the Thames River right now…”, but I figured that we could just follow the local, he knows what he’s doing. It ended up that, yes this local knows what he’s doing, but this local likes to walk. A lot. And as I’ve mentioned before, we normally like to walk, too, but not when we’ve just spent the whole day walking around the British Museum. But walk, we did. Through SoHo, through Leicester Square, past Trafalgar Square, past Scotland Yard, over an unnamed cool looking bridge crossing the River Thames, past a carnival, past a street fair, past a bunch of food trucks, past a loud Brazilian performance, past half of the population of London, to FINALLY make it to the pub. However, as painful as it was, we got to see some pretty cool things along the way (I can say that NOW that I’m lying in my bed…).

The cool-looking-unnamed bridge (it must have a name, I just don’t know it)

Looking back on Big Ben and the River Thames

A performance we caught as we walked through the festival, filled with drums and pyrotechnics. I think I saw somewhere that is was a “Rio in London” performance. I guess Brazil is following us!

St. Paul’s Cathedral in the background

Despite the “death march”, it really WAS a nice day and much thanks goes to our friend, Martial, for showing us around. Once again, I can say that NOW that I’m lying in my bed…