It’s so tiny it has its own stairs! 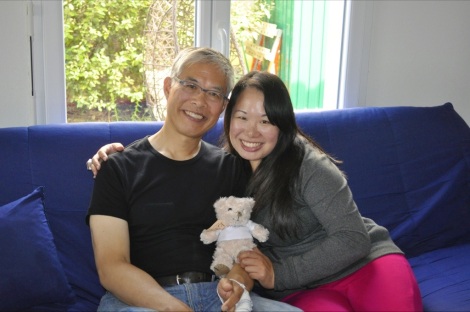 I can’t emphasize enough how happy I am to be reunited with my dad once again. And to know that he’s out of the hospital and on the mend. By the way, Boo hasn’t been replaced. This is Papa Boo, a get-well bear for my dad from Portugal… 🙂

Anyway, after arriving, things have been busy. Last night, we were able to meet with some really cool people from the Terol family’s congregation in Nimes. Although the congregation is French, there are Hmong and English groups there as well, so it’s really neat to hear about how the work is going here. Oh, and most of the people there didn’t speak English so my French REALLY got a workout. Talk about clearing out some cobwebs in my brain to access my high school French vocabulary! Then, today, a couple from the congregation invited us over for homemade crepes with nutella, homemade jams (fig, apricot & strawberry) and sparking wine. Delicieux!

In between meeting with the friends, we were able to do a bit of touring. Frenchie’s father has been a great tour guide, very knowledgeable about the history of Nimes. He was able to show us the 4 major sights of Nimes, well-known for their Roman influences…

1) Tour Magne (aka “Great Tower”)
This tower was built by the Romans at the highest point in Nimes to be a part of their city walls. 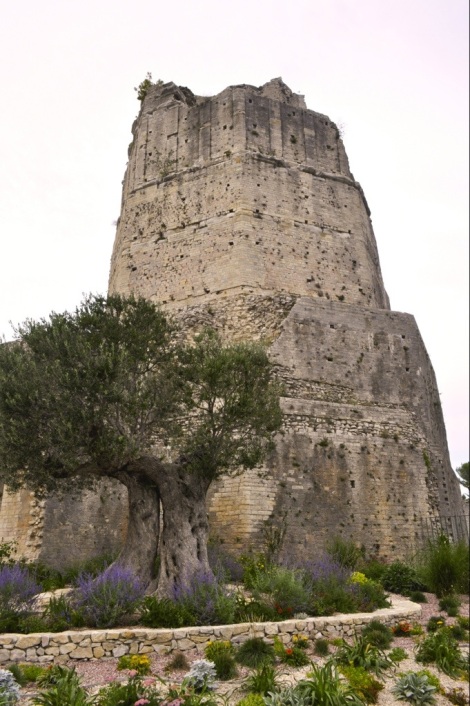 The ruins of the Tour Magne 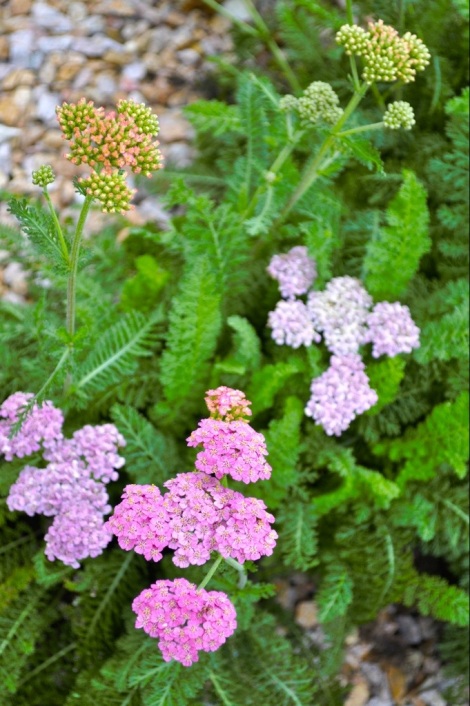 Pretty flowers at the base of the tower

More pretty landscaping at the base of the tower

But the views at the top are worth it. From here, you can see the arena and cathedral.

Contrary to what the name implies, this isn’t a normal house, this was a temple built in 19BC by the Romans, dedicated to the sons of Agrippa. It’s supposedly one of the best preserved temples anywhere. There’s also a 3D movie about the “Heroes of Nimes” inside. And nothing else. A bit of a waste of valuable space, if you ask me. 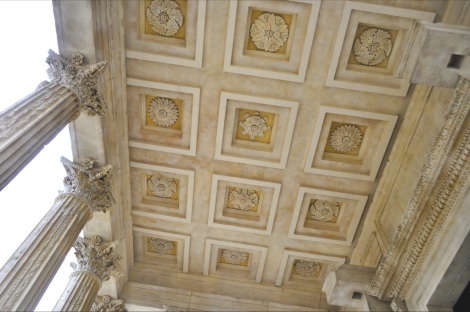 The ceilings on the outside terrace. Apparently this temple was recently cleaned and therefore looks so bright

3) Jardins de la Fontaine (aka “Gardens of the Fountain”). Here we could see traces of an ancient civilization nestled among the trees… 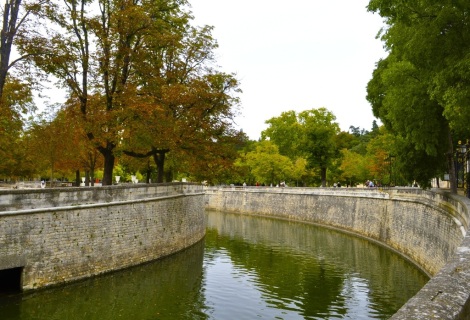 True to its name, the waters play prominantly in the gardens

These used to be Roman baths. Now they are filled with ducks in yucky water.

Exterior ruins of the temple

Either those Romans are short or dad’s really tall…

4) L’Arene (the Arena). This amphitheater, built in the 1st or 2nd century by the Romans, is one of the best preserved amphitheaters in France. They still have bullfighting and concerts here. 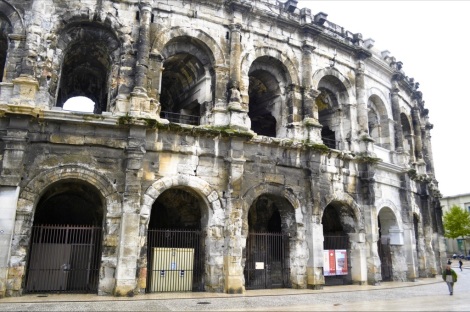 The arena, which looks like a mini version of the Coliseum in Rome

The walkways outside of the arena 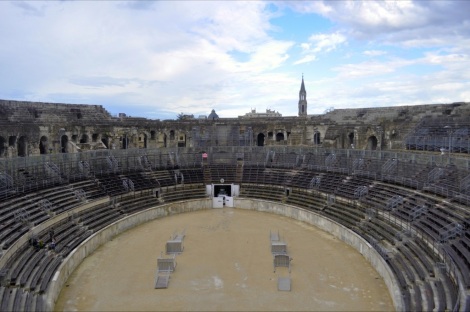 Looking down on the arena floor. Apparently “arena” means “sand” in latin, which refers to the sand flooring the Romans used, which needed to be turned over every few hours due to blood from the gladiatorial games. Gross!

Views from the top of the Arena. You can see Tour Magne sitting up there on a hill in the background

Looking down on the reminders of a civilization, now past

After all this, we had to say a sad good-bye to Pat, who headed via train to Paris, where she’ll catch a flight to return to San Francisco. Another traveling companion is no more. (sniff) Have a safe flight, Pat! 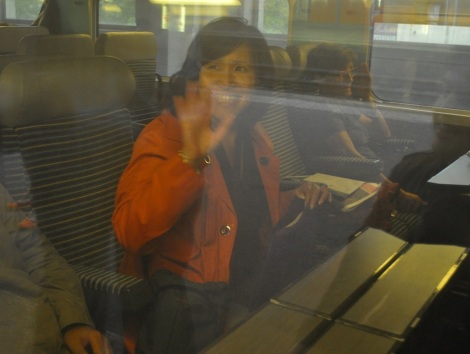 The Château de Montrésor, overlooking the village, with the church in the background. This village is classified as one of the 159 “Most Beautiful Villages of France”.
Traveling in the middle of winter and in the middle of a pandemic is not ideal, but there is one benefit - seeing beautiful villages like these with not-a-person in sight. Read more about how we managed to do a socially-distant road trip last month (pre-lockdown) on my latest blog post (link in bio)...
Looking at these first little signs of spring in the woods…
I’ve been hearing rumors of another lockdown coming, so we’re enjoying the great outdoors while we can...
Life in France is not always a garden of roses (though they can be beautiful). My latest hurdle to establishing French residency was taking an official French test (le test d’evaluation de français or TEF for short). Given that I haven’t taken a French class in over 20 years, this turned out to be an interesting experience. Find out all about it on my latest blog post (link in bio)…
The weatherman was finally right! We got snow today! ❄️
The Jardin des Tuileries peacefully blanketed under a layer of snow 3 years ago. With snow in the weather forecast tomorrow, will this happen again? Stay tuned... ❄️
2020 as a whole has been pretty terrible, but I’m grateful for the little things, such as being able to explore this little corner of Portugal earlier this year, pre-COVID. Thank you @jwabroad and @kaniciacognard for being such great tour guides and taking to some of your favorite areas in the Algarve - it’s easy to see why they were your faves!
I can’t believe that this has been my first post in months. Maybe because I’m usually inspired by travel, and that has been pretty non-existent in 2020 (the exception being this wonderful trip to Seville in January pre-COVID). But there have been little things to be thankful for - specifically being able to return to France after being stuck in the US for 3 months with 4 flights cancelled. Now that we’re back, I’m cautiously planning a trip for the first time in over 6 months. Still unsure on the destination, but it’s definitely going to within driving distance and somewhere where we can spend the majority of our time outdoors and socially distant. And as modest as this is, it’s is giving me the energy to get going again...