Oh, I am so stuffed. That’s the problem when you’re only doing tapas for one…

My day started pretty slow, probably due to my body needing to recover from the tons of walking done yesterday. By the time I left my hostel, it was almost ready for lunch. I knew there was no way that I could leave Sevilla without doing tapas. However, in Spain, lunch starts late, at 1pm instead of the 11:30-12 timeframe of the states. So I was left with a half hour to kill. Thankfully, I happened upon a string trio in the streets, playing the songs of the Beatles. They were actually really good. I must say, the street performers in Sevilla seem to be of a higher caliber than in SF. The other day I walked by a Chinese guy playing that one string Chinese stringed instrument, and he was so much better than the squawky instrument playing by that guy on Grant Street. It actually sounded like music.

After that, it was time for tapas! I went to a really cool place only a half block from my hostel. I tried a thinly sliced shrimp carpaccio, a melt-in-your-mouth codfish (yes I’m addicted to bacalau in all its forms now), and a couscous salad. Accompanied by a nice crisp Rioja white wine. Delicious!

Not pictured: My desert of a trifle of almond cake at the bottom, turron (nougat) gelato and chantilly creme on top!

After that, I desperately needed to work all that food off. And what better way to work off food than by shopping? 🙂 Fortunately (or unfortunately depending on how you look at it), the main shopping streets were just a block away. I exercised moderate self-control. The store that was most interesting to me was El Corte Inglese, a huge Macy’s like department store, but with a supermarket in the basement, a pharmacy on the first floor, and actually pretty reasonable prices in some departments. Talk about one stop shopping! 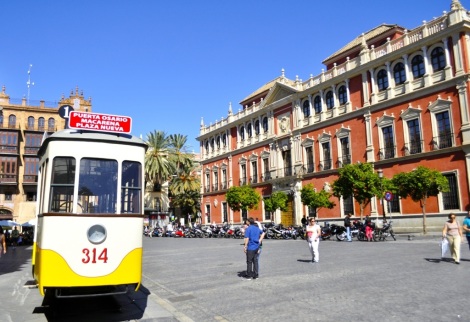 Plaza de San Francisco, near my hostel and also near the main shopping district

I took a little break from shopping to visit the Metropol Parasol. Recently built in 4/2011 by a German architect, this is a love-it or hate-it structure – extremely controversial among the locals. This wood structure stands out in stark contrast to the old architecture of the buildings around it. It IS pretty ugly, to be honest, but I have to admit it was fun to walk around on and get some pretty good views of the city. 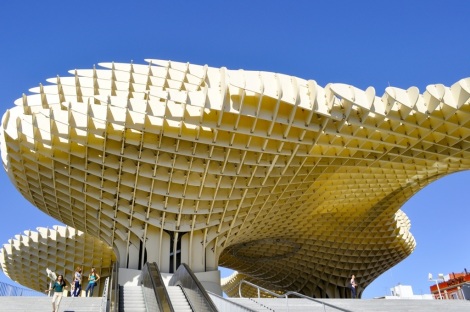 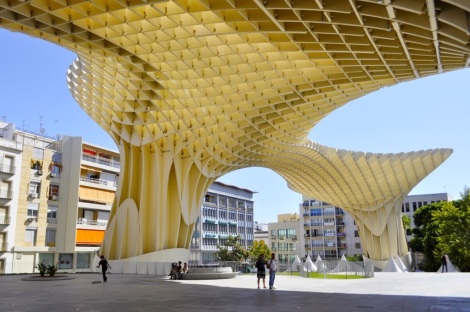 This open area usually houses a marketplace, but since it’s a holiday weekend, it only houses skateboarders 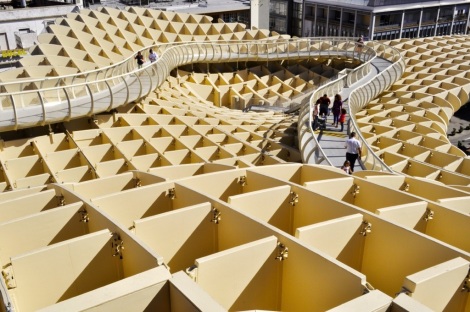 Puente del Alamillo in the background, built for the 1992 Expo

Tonight, I had to do one of the things that Seville is best known for – Flamenco Dancing. Okay, so I didn’t actually DO flamenco dancing, but I was able to catch a flamenco dancing show. On the way to the show, I had to cross a demonstration going up Seville’s main street (Constitution Avenue) and then, a block away from the show, there was a parade which I think was to honor Jesus (I gathered that from the statue of Jesus on a float-type thingie). Catholic parades are not my thing, but I must say that there was a LOT of pomp and circumstance (much more that would ever be seen in the US), complete with a marching band…

But now onto the Flamenco Show. I must say the noise from the “Jesus” parade did carry over into the show, making it a bit distracting. But the performers did a great job of concentrating. The guitar player played beautifully and the dancing moves of the male flamenco dance performer were amazing! He pirouetted multiple times and his feet moved so fast in ways I never though possible. What a great experience! 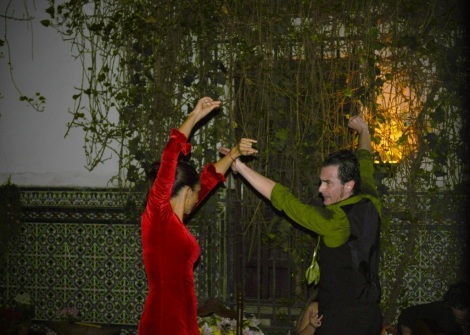 By the way, after the show, I ran into that “Jesus” parade 2 more times: once near the Catedral while walking back from the show to my hostel and 2nd in the Plaza Nueva while leaving my hostel for dinner! Crazy! 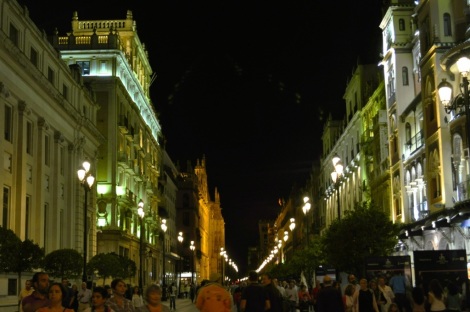 One response to “Eating, Shopping and Flamenco’ing in Sevilla”

I’ve been hearing rumors of another lockdown coming, so we’re enjoying the great outdoors while we can...
Life in France is not always a garden of roses (though they can be beautiful). My latest hurdle to establishing French residency was taking an official French test (le test d’evaluation de français or TEF for short). Given that I haven’t taken a French class in over 20 years, this turned out to be an interesting experience. Find out all about it on my latest blog post (link in bio)…
The weatherman was finally right! We got snow today! ❄️
The Jardin des Tuileries peacefully blanketed under a layer of snow 3 years ago. With snow in the weather forecast tomorrow, will this happen again? Stay tuned... ❄️
2020 as a whole has been pretty terrible, but I’m grateful for the little things, such as being able to explore this little corner of Portugal earlier this year, pre-COVID. Thank you @jwabroad and @kaniciacognard for being such great tour guides and taking to some of your favorite areas in the Algarve - it’s easy to see why they were your faves!
I can’t believe that this has been my first post in months. Maybe because I’m usually inspired by travel, and that has been pretty non-existent in 2020 (the exception being this wonderful trip to Seville in January pre-COVID). But there have been little things to be thankful for - specifically being able to return to France after being stuck in the US for 3 months with 4 flights cancelled. Now that we’re back, I’m cautiously planning a trip for the first time in over 6 months. Still unsure on the destination, but it’s definitely going to within driving distance and somewhere where we can spend the majority of our time outdoors and socially distant. And as modest as this is, it’s is giving me the energy to get going again...
I would love to have one of these doors for my home. If I can ever return home, that is... I’m still stuck here in San Francisco waiting for a flight back to Paris. Since San Francisco is my hometown, I have a place to stay and family close by. So, compared with many in this situation, I have a lot to be grateful for. But I miss traveling, I miss Europe, and I especially miss France. One day I’ll be able to get a flight back home, hopefully sooner rather than later... Photo info: This beautiful door was taken at the Real Alcazar in Seville, a royal palace built in the 14th century. The tile work and details all around are an excellent example of the Mudejar architecture common in the region. .
Looking back to beautiful Seville two months ago, where our biggest problem was finding the entrance to the Alcazar…. Miss wandering through the Seville streets with you @kaniciacognard and @jwabroad ! 💛
Reflecting on finding beauty in the little things during our winter trip to Spain... One of our favorite things to do in Seville was to just walk around the neighborhoods. The doors themselves are beautiful, but they were even better when open, leading to peaceful orange-tree filled courtyards.